Four Seasons: a collagraph series (Part Two - how they were made)

In an earlier post I wrote about how this series of collagraphs came about and I promised to write in more depth about how they were actually made, so here it is.

As with most of my prints, this one started off sketched out on the back of an A4 piece of paper from the scrap paper drawer. (This disorganised scruffiness is why people who ask to see my sketch books are often disappointed.) Actually I suppose it really started in my head, appearing there unbidden as these things often do, and the trick was to keep it there until I had a chance to draw it. I can't be sure but I have a lingering fear that a lot of my best ideas have vanished like mist burning off in the sun. I will never know.

Once drawn out I then transferred the image onto a piece of mountboard which I would use as my plate. I flipped the image so that the print would come out the same I way I had originally created it. You might think that for a scene like this that doesn't really matter, but it does to me....


Now it was time for the fun part, sticking and cutting and messing about with collage. Well maybe not so much of the messing about. It is fun, but there is rather more to it than making a simple collage. As well as the shapes and texture I also have to consider the way different surfaces will take up the ink. I have to think ahead to the practicalities of inking up the plate and also remember that those parts most prominent on the plate will recede on the print. As with all printmaking, everything has to be done in reverse, like living in Alice's Looking Glass world.


Inking up was a slow job, carefully applying the ink to different areas and then wiping away to get the right amount of coverage for each section. Some parts needed to be left with a good coverage, some needed to be cleaned and polished almost to whiteness. Each season in this series of four prints required not only different colours but also its own inking and wiping order. I made swatches at the end of each initial printing session so I could replicate the colours for subsequent ones and I also made notes in my print 'recipe book'.

And then it was time to print. A registration sheet laid on the printing press is always useful to centre the plate on your paper, but for this print it was absolutely vital. The plate is in two parts and these had to be placed in exactly the same relation to each other on every print.

Collagraph plates are fragile and I knew I was asking a lot of this one to survive printing editions of four different prints. Sure enough, some over enthusiastic cleaning at the end of one printing session ended up with the tree trunk tearing. Aaagh! You might think I could simply tape a cocktail stick on the back to hold it together, but this would make enough of a ridge to make the plate unusable. Any repair has to be as flat as possible. I glued the torn edges together and then carefully applied a single piece of paper to the back before varnishing the area again. The join will show on prints but as the tree trunk was textured anyway I think I got away with it.

And finally the four seasons were complete. A framed set will be exhibited at the Yorkshire Museum of Farming from 15th - 30th October 2016 and unframed prints are now available in my shop. 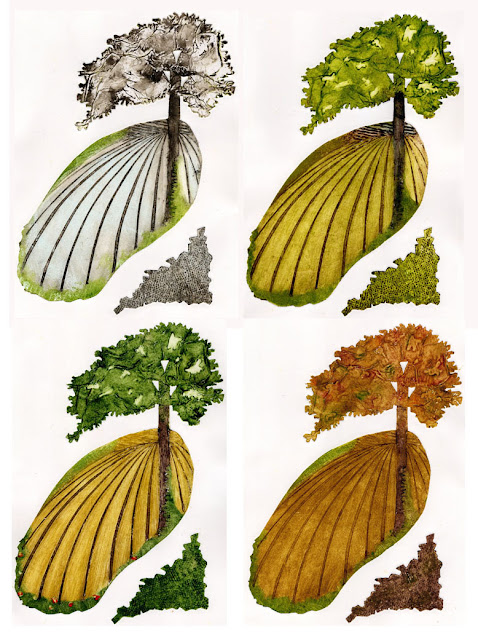 Email ThisBlogThis!Share to TwitterShare to FacebookShare to Pinterest
Labels: collagraph, demonstration, how do you do that, printmaking

I love to hear people's thoughts on this blog, but there may be a short delay before your comment appears publicly. Thanks for your patience.

Jane Duke
I'm a printmaker and painter living in York in the north of England.